Hey everyone. Like most, I just migrated from Lastpass to Bitwarden and the web UI, while nice and clean, lacks an important organizational feature.

In Lastpass’s browser vault view (the fullscreen one, similar to the web view in Bitwarden), when you click on Passwords, Notes, Identities, etc. you see them organized by the folder they’re in.
In Bitwarden, you either see everything in a folder, (all logins, notes, etc), or you see every item in a category, without their respective folders being shown.
In other words, Lastpass lets you sort items both by folder and type at the same time, while with Bitwarden, it’s either this, or that. 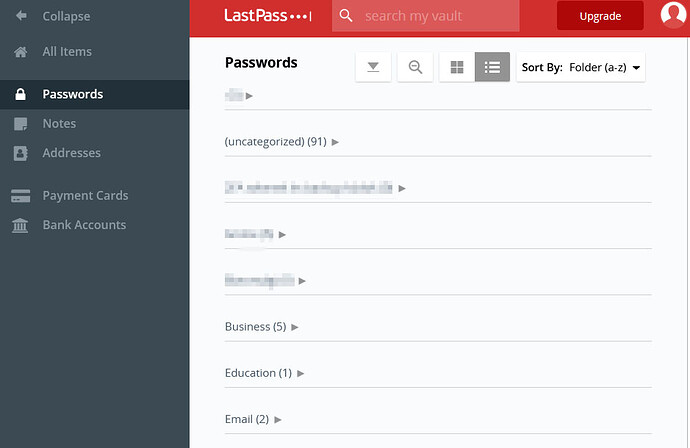 As someone used to this admittedly great organizational feature of Lastpass, I find it very inconvenient to navigate around the hundres of items I migrated from my LP account in Bitwarden.

Would be a nice touch to the current Bitwarden client, yes.

I have requested an UI redesign as well , this could be merged together in one request @tgreer

Make an complet User Interface redesign , especially for browser extension, i moves from lastpass few days ago for safety concerns about it being hacked again in 2019, I am more or less satisfied with BW features compared to it, But falls short In comparisson design wise with nor only LP but all the main competitors [vault-omar]

I wanted to suggest a complete UI redesign as well, but the suggestion rules ask for more specific requests. Features such as more robust organization, drag & drop, etc. are all missing. Let’s hope that with the new influx of users (and hopefully, paying users), the devs get more resources to overhaul the web ui. Otherwise, some may be tempted to go for an alternative that satisfies these needs.

yes I agree , I moved from LP as well a few months, and still cant believe a drag & drop is not a thing, UI is Bitwarden biggest letdown, but competitors (even LP now) does not allow syncing between devices in free tier , thats why I choose BW, even thou the likes of NordPass being temptating. I reccomend using BW desktop app in the meantime, it`s slightly better in UI.

Yes, Bitwarden is currently the only secure password manager that allows syncing between devices in its free version.

Nordpass is pretty attractive too, but the privacy policy says, “We collect statistical information about the activity of your account: the number of passwords and secure notes stored, the date when the item was created, how the password was created (e.g. imported, autosaved, created manually), the strength of your passwords in percentage (e.g. 85% of your passwords are very strong), the strength of your Master Password, the percentage of suggested passwords used, and the number of different folders you have.”

All the information Nordpass collects about passwords make me uncomfortable using it, even though the data is only “anonymized” statistical data.

I was a LastPass user for several years until about 2017. For multiple reasons I decided to find a password manager that better suited my needs. I tried several other password managers, at least a half dozen, none of which worked well for me, even though they were thought of as “Top of the Line”, by many.

Then I found Bitwarden. I tried it for free for awhile and liked it so much I decided to pay for it and stay with it.

Now, I’m sure there are changes that could be made, probably some changes that should be made, but I do find it difficult to understand why it should see, “A complete UI redesign”, maybe to just make it to look or act like Lastpass, or any other password manager.

I’m quite happy with Bitwarden just the way it is and, though I accept that some changes will come my way, I do hope they’re not radical.

Contrary to what was originally raised, I consider the organization to be much more neat with the folder tree on the left side, if desired, with the appearance of a browser that will show the contents of each folder.

Exactly this could be achieved by clicking “All” on the image I attached. That would show you all your folders, so you can open them up to see all items in them (passwords, notes, etc.). Lastpass simply gives you more options for displaying your stuff.

Just to kinda piggyback off this post…
I’m also a recent convert from LP and when I was performing my verifications to ensure everything imported successfully into BW from LP, I missed seeing the number after each folder that indicates the number of items in each folder. That would be a nice addition to the BW world.
Thanks!

@WTK0900 You can always open a new feature request for that, just mentioning it here may go unnoticed

Personally, I think that the LP UI is bloated and clunky,

for the 999 time: the idea is not to copy & paste LastPass but to adopt the market standard design, folder tree on the left side with items description in center

I don’t know so much as to changing the design to be more like LastPass… but Bitwarden in a fullscreen browser is terrible. Currently only filling the middle 33% of the screen. It leaves so much whitespace while forcing Organisations and collections to wrap lines which looks awful.

In general password organisation should be improved greatly. I cant even filter out for just my items. They are all mixed in with my orgs and collections.