Hello, I am a Bitwarden noob. Checking Bitwarden from transition from KeePass perspective.

I can’t import data from KeePass, the error I get is on the screenshot. The error message says ‘The field Notes exceeds the maximum encrypted value length of 10000 characters’. I sorted all records in Keepass database by notes and went one by one through each containing notes and wherever a note seemed to be long I copied the text and measured the number of characters in Notepad++. Not a single note was longer than 1132 characters. Anyway, I removed those notes as well but still my import fails.

What can be the cause for this import failures? Can any of the plugins used in KeePass have impact on the data structures and sizes which Bitwarden factors into the upload job? 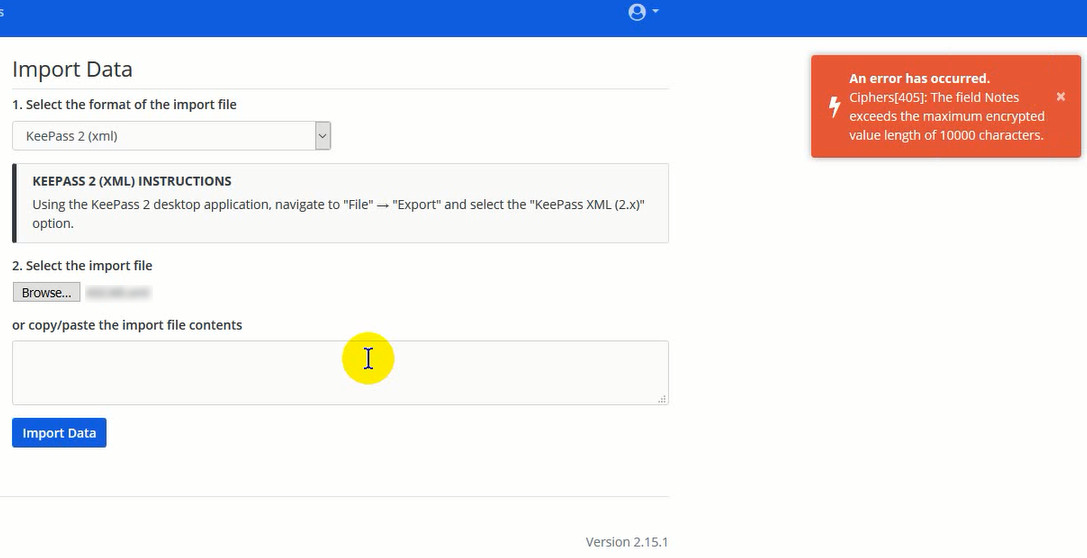 Hello @Ascar,
my guess is that you are importing in wrong format and that could be the reason Bitwarden is importing it as one big note.

Could you check if your Keepass is exporting in CSV format (like KeepassX and KeepassXC). If so on import select KeePassX (csv) and everything should be fine.

I followed Bitwarden’s guide that says - if you are on KeePass 2.x then export data in XML format. I did not try exporting data in the ‘downgraded’ format i.e. ver 1.x with CSV output. I will try this now and see how it goes.

Thanks for the hint

Exporting data in KeePass 1.x CSV format bore no fruit. However I have been able to upload data by using Bitwarden CSV template and manipulating data in Excel.

However I have been able to upload data by using Bitwarden CSV template and manipulating data in Excel.

I also had problems importing my data from 1Password and had to manipulate some data to be able to import it into Bitwarden. So I wrote this topic: My improvement for importing data from "1Password"

May be you have the time to tell other KeePass users what to change to be able to import data into Bitwarden?