When I open the Windows desktop application it always presents a blank white screen with menu items only: 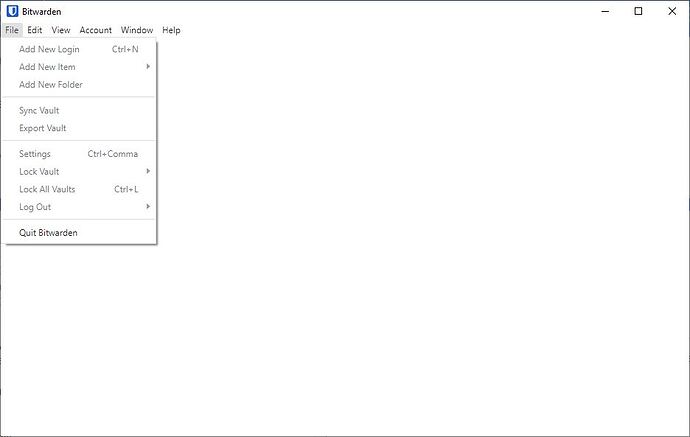 I’ve fixed this previously by uninstalling then re-installing the app, but the issue returned the next time I open up the app in Windows. So not an ideal solution.

Seems I’m not the only person to experience this - https://www.reddit.com/r/Bitwarden/comments/t8v7pz/bitwarden_whiteblack_screen/

Any ideas on how to fix this?

Could you perhaps provide the OS you installed it on, the type of install either Windows Store or .exe and if the standalone installer was used, was this installed with admin rights or to the local user profile?

I’m on Windows 10 Pro version 21H1 and I downloaded the .exe installer from the website.

Strangely enough I just ran it now without any issue. I wonder if it’s having an issue when I’m running some other application at the same time. I’ll have a play tomorrow when I’m running my usual full suite of dev tools and see if one of those is causing some conflict with it somehow.

It might be Microsoft Teams desktop app causing the issue, but only after it’s been running a while. I’ll try and experiment more next week.

At the end of the working day I’ve just been closing apps one at a time to see if the Bitwarden desktop issue went away. It finally worked after I closed Microsoft Teams. However, it does run without issue with Teams if it’s freshly opened up. I’m using Teams heavily throughout the day, so maybe it’s locking some shared resource after a while as I believe both are build on Electron.