I know Unlock with Biometrics | Bitwarden Help & Support says that right now FireFox does not support nativeMessaging so the FireFox browser extension will not work with biometrics.

According to 1630415 - make nativeMessaging an optional permission and Native messaging - Mozilla | MDN it looks like FireFox does now support it.

3 Likes
I'm on the latest version of FireFox 87 and Bitwarden, but I cannot seem to get biometrics to work on the Firefox extension
Firefox Biometrics
tgreer (Trey Greer) February 5, 2021, 2:09pm #2

Firefox does support nativeMessaging, but unfortunately, the permission for it is not able to be made optional. The Bitwarden team has decided to withhold biometrics from Firefox until this is resolved, so those who don’t wish to use or cant use biometrics are not forced to enable an extraneous permission.

You can see all the fun we had, here: Extension disabled due to new permissions · Issue #1548 · bitwarden/browser · GitHub

I thought 1630415 - make nativeMessaging an optional permission is saying they fixed that and made it optional?

It’s not quite in production yet, but it’s definitely moving in the right direction at Mozilla!

So I have desktop app (1.25.0) installed from Apple App store (I am on macOS) and browser extension (1.49.0) installed on the latest Firefox 87b9. I can enable browser integration in desktop app but still there is no option in Firefox to unlock vault with biometrics - only can select PIN one. 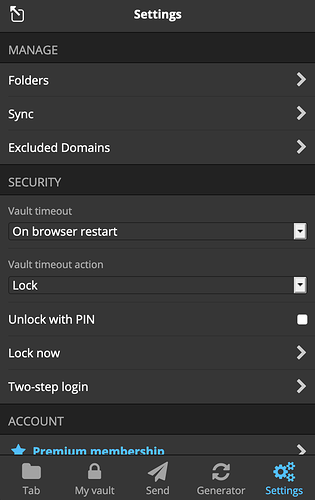 Is it expected not to work wtih Firefox 87 beta? Or I have to do something extra?

yes I’ve seen it but what does it explain? Latest browser add on added biometric support for Firefox >=87 which I am using, hence my question.

@kapitainsky @vachan same for me. newest firefox version. newest desktop app(which shows biometrics checkbox in the settings) and newest firefox extension which not shows the check box. just pin code.
Updated the desktop app und and the extension because i thought it is fixed. it is not. got to delete the extension and desktopapp and install the old versions again. that sucks.

I the meantime I have tested with Chrome browser - it works, but with Firefox no chance despite latest versions release notes stating that it is supported.

It is not deal-breaker for me but does not leave good impression. If it does not work just wait before releasing some half baked version. Not that in this release many other things were delivered. Maybe problem is with Firefox beta - release makes it clear that it only works for Firefox >=87.

In case you guys missed it:

This was unfortunately a false statement, completely my fault and misunderstanding. My apologies

. This will be in a near-future release but didn’t make the release candidate in time for the v1.49.0 release.

@dh024 That statement is for Safari biometrics.
@kapitainsky Probably the version checking couldn’t work with 87 beta.

@sugianto Really? The thread I pulled it from was about FF.

I think users are really getting confused by all of the conflicting information coming out of the BW team lately. But I am still hopeful that we will get both FF and Safari working soon.

@dh024 Somewhere in that thread, a user asked about Safari, so Chad was responding to that user. So, it is not conflicting information. Biometrics on Safari is still in development.

Firefox biometrics will be available when Firefox v87 is officially released.

@sugianto Seriously? I am a big fan of BW, but surely the BW team can see how users are getting confused, not just from this thread but by the whole roll-out of the browser add-in biometrics and the confusing announcements and remarks in multiple places about support for FF. If I am alone on this, then my apologies for ruffling your feathers.

Firefox biometrics will be available when Firefox v87 is officially released.

Firefox v87 is now available on the Mozilla ftp site, which I installed today. I also updated my BW desktop app for MacOS to 1.25.1. The browser extension is the most current available (1.49.1).

Contrary to what was stated above by @sugianto about Firefox biometrics being available in v87, I am still getting the TouchID integration error that we saw at the beginning of the roll-out for this feature: 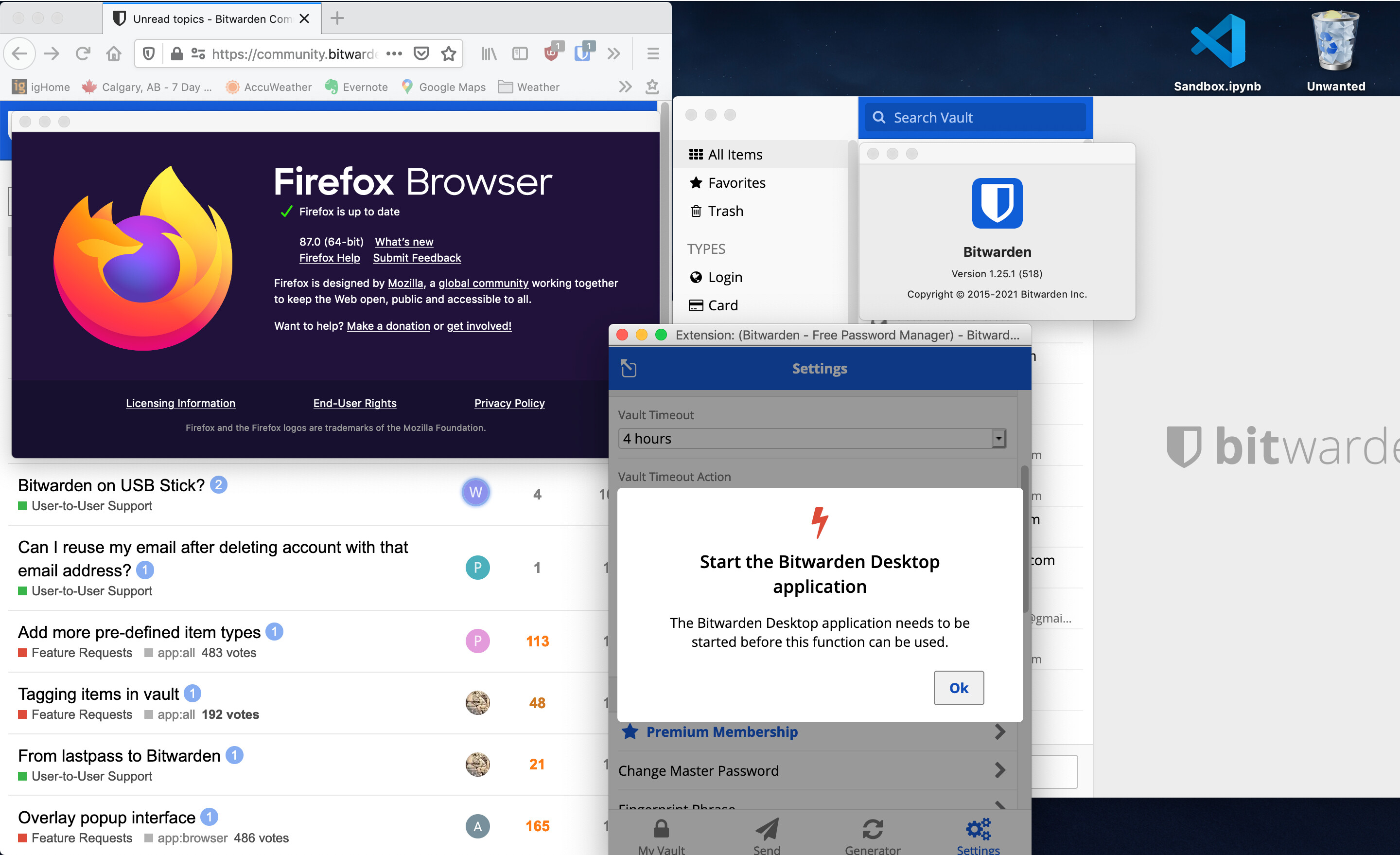 Has anyone been able to get the TouchID integration to work on Firefox 87?

Doesn’t work here either, macOS 11.2.3 - M1 Macbook. Firefox 87 and Bitwarden 1.25.1 (from app store) + extension 1.49.1. I even tried the Firefox 89 alpha version but got the same result. I got the excat same error message that you are getting. Browser integration is of course enabled in the settings because biometrics does work in Google Chrome. Native messaging permission is enabled in the Firefox’s bitwarden extension settings page.

On Windows 10 (20H2) the same combination (FF 87, Bitwarden 1.25.1 and extension 1.49.1) is working well, tried two different machines a desktop pc (with usb fingerprint reader) and with my work laptop.

based on this issue - Biometric unlock not working on Firefox 87 macOS Intel · Issue #1731 · bitwarden/browser · GitHub - it seems that in some cases ~/Library/Application Support/Mozilla/NativeMessagingHosts folder is not created. I imagine they will fix it in the next add-on versions but in the meantime creating it manually solves the problem.

@kapitainsky thanks for the tip :)! Yeah, manually creating the folder fixed the issue. Although for some reason I had to go to desktop app and disable & re-enable the browser integration setting. Only after doing that on top of creating the directory biometric started working.

You are right. The bug in BW Firefox add-on (at least for macOS) is that it assumes that this folder exist - which often is the case as it could be created by other add-ons. It attempts to write there some json config file when browser integration is enabled - hence after creating the folder it is needed to re-enable this setting.

So for unlucky ones full workaround at the moment is: