Use native language names instead of ISO codes in UI

A severe detriment to current l10n/i18n efforts is that native names aren’t displayed for the languages each Bitwarden tool is available in. Currently that’s just the Desktop and Web Vault, but I’m categorising with app:all as I know this is one of your goals and I have ways to make this a very trivial effort (please read on!).

Most users won’t be aware of the concept of ISO codes. The generally accepted best practice is to list the language’s native name.

A picture is worth a thousand words: 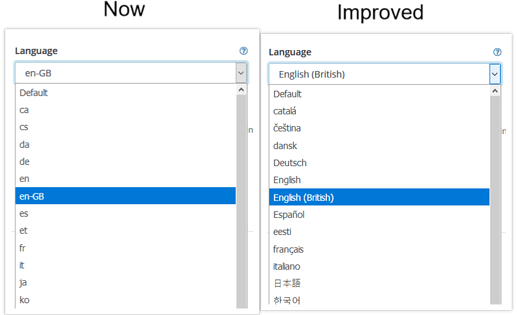 Now for some advice on how to best do this, from someone who’s been in both the web design and l10n game:

I regret to say I don’t have the programming skill (in fact, I’m not a programmer!) to implement this, but would be very grateful if you could look into implementing this fairly straightforward change.

Added this next version. Includes ISO code and native name: