Send notification also to users with custom roles when a user accepts the invitation to join an org
Kruger2147 (Alex Kruger) March 31, 2018, 5:30pm #2

Agreed. The current way it’s implemented makes for a bad UX, and the Confirm Invitation is a little hidden. An email notifying the Admin, possibly with a link to the confirmation would make for a much better user experience.

Yea, constantly have people waiting to be confirmed because I dont find out that they have accepted the invite!

This is a UX fail. We use bitwarden to share passwords with our customers, and after they accept our invitation and log in they cannot see anything until we confirm them. It usually confuses them.

Inviting the user should be enough without having to invite and then confirm. Once I invite them I expect that they should have access.

Very happy with bitwarden overall, this is definitely the biggest “quirk” and took us a while to figure out what was going on the first time we invited someone.

just joined Bitwarden from lastpass and was annoyed that this user experience was poor.

I just recommended a client to share a p/w with me. He doesn’t even know how to confirm my invitation.

1 year later and no update?

Yes please. That feature would be useful.

Yes, this has tripped me up several times and I just recently begun using BitWarden for several organizations, an email notification would make my life MUCH easier and improve adoption rates as end users will be less frustrated thinking something has gone wrong.

I see this still hasn’t been added. New bitwarden user and just invited users to the organization and wasn’t notified that they accepted the invite. Either need to send owners a notification that the invite was accepted or remove the confirm option.

Actually, this is now available

- when a user accepts, all owners/admins will get the email. 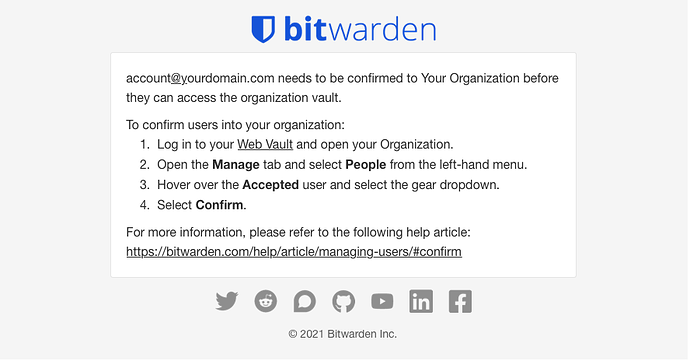 Is there a setting that has be enabled? No one in my organization received the email shown in the screenshot.

Hmmm, not that I am aware of. Are you self-hosting or using the Bitwarden SaaS service?

We are self hosting.

You’ll need to update your server version to the latest release (just occurred yesterday) to gain this functionality.

Is the update something that happens automatically or does our admin have to manually install it?

The server admin will need to run the update commands, found here:

Closing this request since this has been implemented