I’m trying to import my data from 1Password, and I get the message:

The error message should contain the index number of the offending entry. You would then need to open the file and locate the that item and either remove it or reduce the large amount of data associated with it. Then save and re-try.

I am having this same issue, how do I go about finding the actual entry causing the problem?

For example, my error returns the following:
An error has occurred.

I had to use BBEedit to open the data.1pif folder and find the 3 lines supposedly too long. They were not too long.

I deleted them anyway, but the problem reappeared with 3 more lines. I redid the procedure several times with always the same result.

I worked around the problem by choosing to export with the option “Selected items” rather than “All items”.

It’s good for IDs, Secure Notes and Credit Cards. This is what is essential.
Other folders: Identities, Passwords, Software Licenses, Bank Accounts, Memberships, can not be imported.

Just an update for anyone encountering this issue like I was, I managed to get my 1password data imported by doing the following:

I exported just a handful of items at a time from 1Password and imported data to Bitwarden in multiple sets. For example, I exported passwords for accounts A-B, C-D, E-F, etc. and import each set one by one.

By doing this I discovered that Bitwarden will not overwrite existing data when new data is imported, which was a godsend.

Another interesting thing I discovered was that there was only one 1password entry that was screwing up my import. Importing small chunks helped me easily find that entry. Also, I noticed that if I tried to import too big of a chunk of data, Bitwarden would throw the same “Ciphers” error as before. When I broke my data into smaller chunks (without modifying anything in my 1password data or the .1pif file) the same data imported successfully.

Finally, I found no correlation between the “Ciphers[nnn]…” error and the line number in the .1pif file that was too long.

Yeah, I saw the same thing; the “Ciphers[XXX]” value does not correlate to the line in the file. What I did was used awk to print lines that were longer than 10000 characters. For example:

I found, for me, it was 1 entry. Google had inputted their privacy policy (yes, the entire thing) into one of my entries. Found it by narrowing it down as Justn did, exporting the alphabetical letter section as a 1pif, using TextEdit to view, couldn’t miss the huge amount of text, going to the entry in 1P then Edit , Show web form details , then deleted the section. I don’t recall the name of the section but it was at the bottom of the list.

I just ran across this today. The trick is that the 1pif file has two lines per entry. So just take the number you get and double it. e.g. look around line 400 and 494. You should see it.

Mine was the Omni Sync service that plugged their EULA in a hidden field.

Thank you Justn. Your method worked for me. To help others with a little more information I was having trouble finding which logins were the offender if you will.

So by way of example let’s say that you have a 1Password export of G-H that Bitwarden marks as ‘bad’. Go back to 1Password. Choose a login, click on “View Saved Form Details”. Look at the bar on the right which I believe is also referred to as an elevator box. If it is very large, for example 1/3 of the hight of the window you probably do not have a problem. If to the contrary it is very small you have probably found the offender. I was doing this for my wife and sure enough Google put their EULA in 1Password. So choose edit. Then scroll down to the offending data. Here is something that is unusual, you have to scroll down about half way through the EULA or other offending data to get to the white minus sign in a red circle to delete the data. In her case they were mostly EULA’s from large companies like Google. I would also suggest trying slightly larger groups initially, like A-E, G-K, etc. Then if you are flagged for 1 item in that group go to 1Password, try Google first. Delete the large data item then re-export from 1Password but here is where I encountered another anomaly. In my previous example I had exported the 1Password file as 1Password G-K.pif. When I corrected the Google login and exported from 1PW to overwrite the existing file Bitwarden kept flagging it as bad, so I just renamed it to 1Password golf-kilo.pif and Bitwarden imported it without issue.

Had the same problem today December 15, 2020, with alibris.it who did the same thing, their entire EULA was in the 1Password entry. Can confirm BoxOfSnoo’s theory, entry was at exactly twice the value of the “error code” Bitwarden said it could not import (so in my case, 1448). 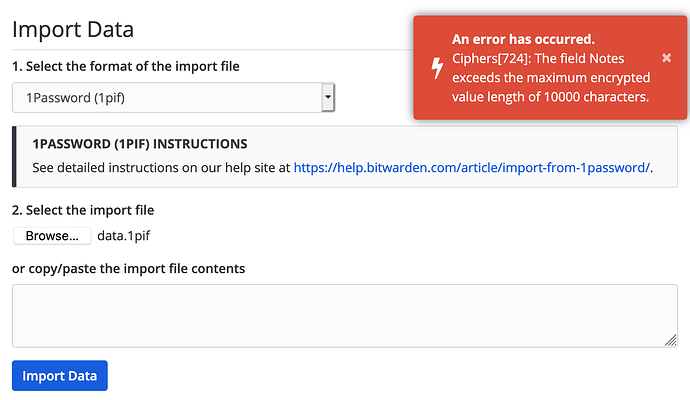 I was attempting to switch from 10 years of 1Password today and ran into this problem. The import failed on two items, which have no notes at all but produced the error.