We’ve been finally hit by the Error Code 6 issue “An error has occured. Traffic from your network looks unusual. Connect to a different network or try again later. [Error Code 6]”. Users at our office are starting to encounter this an unable to access their vaults.

Clearly your anti-DDoS system is malfunctioning, and Bitwarden is currently casting blame on users by suggesting there’s something wrong with the network they’re attached to. Reddit is exploding with reports of the issue:

r/Bitwarden - Locked out due to IP blocking - Poor security measures from...

r/Bitwarden - Locked out due to clumsy IP blocking at Bitwarden

r/Bitwarden - What happened Bit? I got [Error Code 6]

r/Bitwarden - Why can't I log in to my Bitwarden Firefox Plug-In when I use... 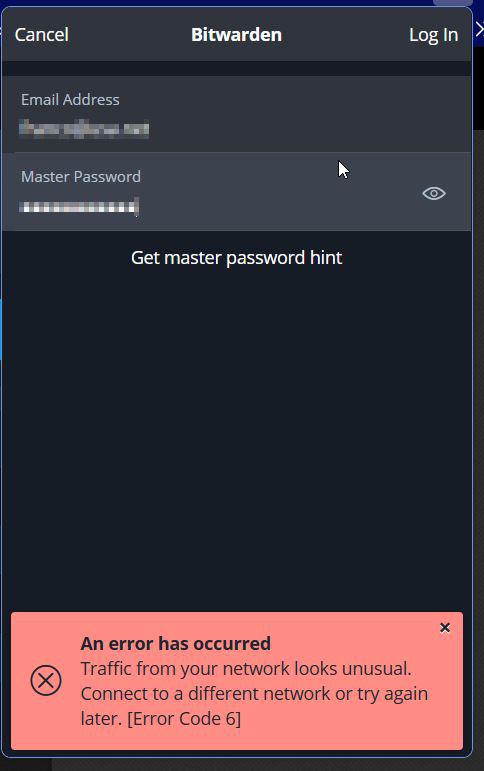 When will we get a meaningful statement from Bitwarden on this issue? Or better yet, a resolution?

Hey there, is the team using a VPN? Shared network traffic can get flagged as unusual, you can see more here: Unusual Internet Traffic | Bitwarden Help Center

For official support, contact the team directly any time at Get in Touch | Bitwarden

No, they’re on our office network. Each user has their own public IP address (we’re an ISP/NSP). Each device is monitored so very unlikely there’s any abuse coming from that IP address as it’s directly assigned to one device. I’ve already submitted a support request but have yet to receive a response.

Thanks Gary, you should get an automated response back, to confirm receipt of the ticket.

To clarify, we have received the autoresponder but no ticket # or response from a live human.

Changing program behaviors and/or adding new features are high-risk endeavors. Safely implementing new/changed code requires new and complex tools. The most important of these is an automated regression-test tool to ensure that the new features don’t break the old code. If you don’t have a comprehensive suite of regression tests sufficient to verify the correct functioning of the current code, then adding to or changing that code will inevitably put its functionality at risk. For example (as detailed below), BitWarden has suddenly started locking me out of my vault.

I have been using BitWarden (via a FireFox app on my PC) since 2019, and it has always
allowed me to access my vault if I enter the correct password. However, BitWarden has
suddenly started locking me out because “traffic from your [my] network looks unusual”.

High-end users often deploy a Virtual Private Network (aka. a VPN) for privacy/security
reasons. VPN apps encrypt/decrypt a user’s outgoing/incoming data (which prevents their
ISP from spying on them). It vectors the resultant data packets thru a user-selected VPN
server. The VPN server decrypts/encrypts the incoming/outgoing data. And it uses a new,
server-assigned IP address to transfer that data to/from the user’s intended destination.
Targeted websites see only the server-assigned IP addresses (which makes VPN users
difficult to spy on). The VPN servers pull these addresses from a pool of IP addresses.
They typically assign multiple users to each address.

People use VPNs for different reasons. Certainly all competent cyber-criminals use VPNs,
but not all VPN users are cyber-criminals. Billions of people in Russia, China, Iraq,
Iran, and India – indeed, freedom lovers the world over – rely on VPNs to safely access
government-banned websites. Other folks merely dislike the idea of “sharing” their private
affairs with online corporate stalkers (viz. google, Microsoft, etcetera).

Banning VPN users is little more than a half measure. If BitWarden’s programmers
truly want to provide improved protection against key loggers, then they should give users the
option to enable Two-Factor Authentication (2FA). But many, perhaps most, users will find
2FA to be more intrusive than needful. I rely on the following protections instead: