Im wondering why the app does not have a checkbox which allows to run the app automatically when windows is booted up. Also please consider adding a “minimizing” feauture so when pressing on the “X” the app does not close itself but goes into the traybar without the need to re-unlock it when opening again from the tray. Thanks!

The autostart part of your request could be fixed by copying a shortcut to the startup folder in the start menu.
Per user: C:\Users\username\AppData\Roaming\Microsoft\Windows\Start Menu\Programs\Startup

@StephanP Thank you. Would be of course nice if the option would be stock…

Adding a shortcut in the startup folder works fine, but the desktop app ignores the requested startup window size, so it does not start minimized (or better still, only in the system tray).

I was about to tell that. Manual hacks work, but a quick checkbox would make it much easier to be done.

And good point from @Blunt to make it run minimized at 1st. That is certainly a wise choice.

And it is a better usability when users just select an option to start BW automatically than manually having to create an entry in the startup folder.

Please add the check box to run at startup!

I would also like a checkbox for startup. Would be nice if unlocking desktop app could also unlock browser app.

+1 to all those suggestions

How is this still not a thing?

How is this still not a thing?

Good question. It’s been two years and three months at this point. Strange that such a basic feature is still not implimented.

Run at system startup, may be considered low-priority due to it’s non-critical nature and the existence of a partial* workaround. Nevertheless, this seems like low-hanging fruit that an intern could knock out fairly quickly.

*(See Frank’s comment for what I mean by partial.)

Run at system startup, may be considered low-priority due to it’s non-critical nature and the existence of a partial* workaround.

If you have created a shortcut in startup folder for Bitwarden you don’t have to do this as a daily job. Once done it works till you reinstall your computer or Bitwarden. That’s why this feature is not high priority I think.

This should be fixed ASAP, not as a technical criticality but as an ergonomic and usability criticality. I administer 1000s of computers and could easily link this into the start up folder on any one of them or all of them but I still searched, waited and lost days wondering where the “Start with Windows” option was. I could not believe such a basic and obvious option was not implemented.

Many people, e.g. my wife, would not have the first idea about how to add this. The lack of this option degrades the user experience and thus the product.

The trick that can be done for now is this:

That way it will start to run on logon.

It’s a workaround, but it works. Yet, we still need this.

I’ve been using the browser extension a lot lastly, but surely it would be good if you need to have this feature implemented.

Bitwarden developers, this is the code you need to add to the NSIS installer script that is packaged in your installer for Windows (the one downloaded after the stub is run):

How can I add a shortcut to Startup folder? - NSIS Forums

This took about 15 minutes for me to: find that https://github.com/Bioruebe/UniExtract2 exists, install it, find the exe the stub downloaded into the Local\Temp folder, and discover it was a NSIS installer, look at the scripting language to find this link.

I’ve done everything but write the code and test it for you (for Windows at least, the other OSs should be similar in the idea of adding a startup item post install script). I can’t do the whole thing. I’m a sysadmin/scripter, not a programmer, so my digging skills at digging through the BitWarden Desktop github build process isn’t up to figuring out where the build script you need to add this to, but anyone that has access and knowledge of the code should be able to knock this out very quickly. Again, similar for other OSs and their installers.

With NSIS, you can add a checkbox to ask if you want to install the startup item too. Same place in the script you ask if the use want to run the application post-install “.onInstSuccess”.

I’m handing you a reasonable and quick, supportable, and fairly standard way to create the “Launch on startup” until you can code it in the UI (which is the real answer, but takes longer.)

Lots of installers do this. Users expect this as an option. I’ve basically handed you the code.

We’ll be adding this function in an update soon! (For Windows, Mac, Linux)

Autostart is not included, but it is half way for this feature request. 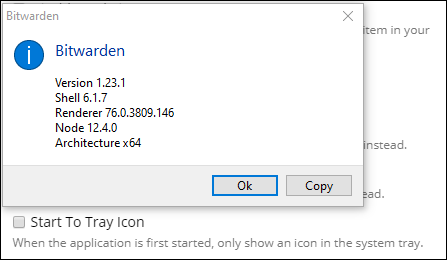 There is an option in the Microsoft Store app to “start automatically on login”, but it doesn’t seem to be working for me. I’ve tried to start the app with admin privileges and set tick mark again, but that didn’t do anything either.
I wonder if I should just use the standalone app, rather than the Microsoft store to solve this problem?