Note: Your question may already be answered in the Bitwarden Help Center.

What’s the current status of the Mac BW app and Safari extension versions?
Any issues with Rosetta 2 or do they run natively on M1?

Not native in M1 just yet, but no issues reported so far with Rosetta 2.

Great, thanks. 15 characters yet.

Good to know that it is underway - searched for it here https://isapplesiliconready.com/ and came straight to the forums 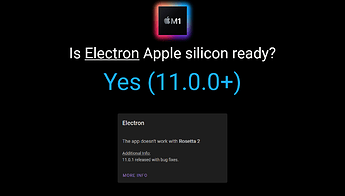 The Electron team is excited to announce the release of Electron 11.0.0! You can install it with npm via `npm install [email protected]` or download it from our releases website.


Some highlights from the Electron 11.0.0 release include:

This is one of the last few remaining apps that I use that didn’t make the move to AS yet. Hope this will change soon.

Really looking forward to this!

FYI you can track the dependencies for this to be a thing here Update electron to 11.1.1 by Hinton · Pull Request #247 · bitwarden/jslib · GitHub

Previously, I had tried to build+pack a universal Bitwarden using electron-builder 22.10.4, but it failed due to SHA issue.

Today, I tried to build+pack a universal Bitwarden using electron-builder 22.10.5 and was able to get it running.

There may still be some other packages/dependencies that need to be updated to deal with Apple Silicon issues; however, this at least gives some hope that Bitwarden and other Electron apps may provide Universal builds soon.

For anyone interested in latest updates, I saw that PRs were merged updating electron-builder and adding settings for building universal macOS binary.

If everything goes well, we might be running Bitwarden app natively on Apple Silicon in next release.

For anyone still waiting looks like its pending review/some updates to build.yml…

Any update on this?

To some extent, SOLVED: Safari Extension, Version: 1.49.1 is running in Safari on my M1 w/o Rosetta.

Still showing as intel only for me.

Thanks to all the developers for their hard work!

How can i get this version? The dmg contains only x86_64.

Thanks for the information!! Will it available outside of Mac App Store as well in the near future? I ussaly don’t use the App Store.

Indeed that is the plan! We’re working on some build automation to allow it since all the GitHub files are automatically produced from the merged code for transparency.