So I have not found a post talking about this and I was wondering if anyone else has experienced this issue.

I have BW as my autofill service as part of Android and the accessibility icon as a backup and when I am trying to autofill into certain apps, apps that I have to associate the URI to the password first, it does not seem to populate the autofill dialog with my newly matched sites (see screenshot). I would understand not listing the possible matches, but I feel like the forced matches should come up without having to go into the vault every time.

Is this the normal behavior or is this a bug? Coming from LastPass this seems to be a bug but who knows. Anyone else have a similar experience?

A couple of things. When you paste it in, does bitwarden attempt to save the password under a different URL?

What autofill are you using. I ran into a problem with Bank of America app where the password did not get fill. It turns out because the app prevented the password manager from filling using the Android autofill framework. I had to switch on the older accessibility to bypass the issue.

When you paste it in, does bitwarden attempt to save the password under a different URL?

Yes a new URI is saved as androidapp://whatever. When I click that pop-up to open vault it comes up as a matched site and below it are possible matches.

What autofill are you using.

I am using the official autofill for Android 9 and I have BW selected as the password manager, not just the accessibility work around that password managers used for a while. The autofill functions perfectly it just doesn’t populate that pop-up in the screenshot when I could swear it used to for some sites/app, but I could be wrong.

So even if you use the newly added site, it still does not auto fill?

The autofill from the field UI is not setup as well as the one in LastPass. You have to traverse through a few submenu to get to the list. What happens if you are on the login screen and you click on the bitwarden extension icon, it should bring up a list of matched sites? There should also be a number on the bitwarden extension icon indicating how many sites matches.

There is no extension, I am talking about the android experience, not the desktop browser experience so I am not sure how to answer your question.

ah OK, I got confused there.

Apparently sites can be autofill enabled. Basically they are recognize by Bitwarden as being compatible with autofill framework. In those cases, the autofill framework is used and when you select the field, it will display a drop down with a list of entries that matches the site.

If the site is not autofill enable, then you get a drop down to click on and go to the vault where it will display a list of matching website in the vault. You click on the entry and it will filled it in, but requires a trip to the vault.

Then there are weird sites that I haven’t figure out how to enable like Disney Plus App, which doesn’t work for some reason.

If the site is not autofill enable, then you get a drop down to click on and go to the vault where it will display a list of matching website in the vault.

Yeah I get that, but I would think after forcing the association the first time it would start appearing in that drop down, that is at least how it worked with LastPass.

It should so something is wrong. Does the uri match the one in lastpass? Does lastpass work and bitwarden does not? What autofill setting is being used in lastpass?

Does the uri match the one in lastpass? Does lastpass work and bitwarden does not? What autofill setting is being used in lastpass?

I can’t say I have already transitioned off of LP and deleted my account so this is purely from memory. My understanding was that at least on android, you could do 3rd party URI changes, but they were not user editable or viewable in any way. It was kind of just magic in the background, which worked like 80% of the time. I think it said something along the lines of “Do you want to associate this website with your password and share the association to the community” or something like that but I could never find where those associations were stored.

Do you use android and have this same issue or does the pop-up populate with the options as it should?

Apps are not magical, so it’s may be useful to understand how they work. The way the android app / Password manager interaction work is that the app has a URI just like the website. Typically, the URI is the same as the website, so when you add the website the android side works, too. However, this isn’t always the case. The example I can think of is Bank of American where the URL is definitely different.

On android, you have another annoyance which is multiple version of Android have multiple autofill. If you are using a recent android version, the prefer method is something call Autofill framework. For older android you use something for accessibility. You have to set that up no matter which password manager you use. It’s demanded by the OS.

Different manager have different strength on what site they can managed. For example, I haven’t been able to autofill Disney Plus App using LastPass or Bitwarden, but it works with Enpass. It’s useful to keep the LastPass around for diagnoses.

In any case, let’s get back to resolving your issue. We have established that you are using Android, but what version are you using? What do you have setup as the autofill?

We have established that you are using Android, but what version are you using? What do you have setup as the autofill? 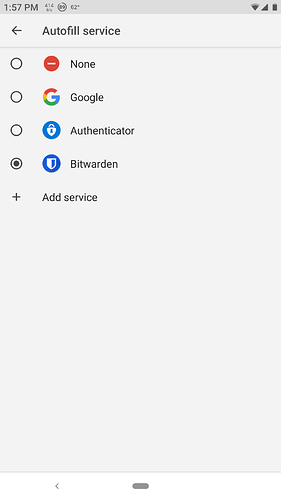 I am not trying to be ungrateful and I am thankful you are here to respond and work though this, but I already said all of this in the original post and the title of the post.

Apologies if I often repeat the questions, I have somewhat limited time to help and sometimes I get the threads mixed up.

Back to your issues, one thing I have notice that different autofill option have different behaviors.

As an experiment, try turning off accessibility autofill but keep autofill framework on.

Bingo, now it is filling in the options in the pop-up, good work. I wonder if there is there a fix for this other than just disabling the accessibility autofill.

I am guessing it is a precedence issue, but the question is who defines precedence? Android itself or the app?

Also is there an official way to file a bug report or are these forums generally how you do it?

I think the precedence is probably determine by the password manager. Based on a conversation I have with Enpass tech support. They indicate enpass on Android will check if the android application supports the autofill framework, it will use the autofill framework to fill. If not, it will change to the accessibility method. I am pretty sure other password would work in the same way.

My guess is that Bitwarden will use autofill framework if all of the fields it’s checking supports autofill and if not change to accessibility. I am assuming that your issue with accessibility only shows up on certain apps?