The feature name would be called Grid 2FA

This feature would allow an additional layer of security and another option for someone to secure their account. The way that this would work is that a user would be given a sheet labeled a - z on the x-axis and then 0-9 on the y-axis. This sheet would then be printed and stored in a safe location.

The way to use this feature would be that the 2FA would ask for a series of 3 characters along with their coordinates. Example: A5, U9, K6. Then this user would look at their grid and enter the coo responding letter or number. If they get it all correct then they passed the 2FA 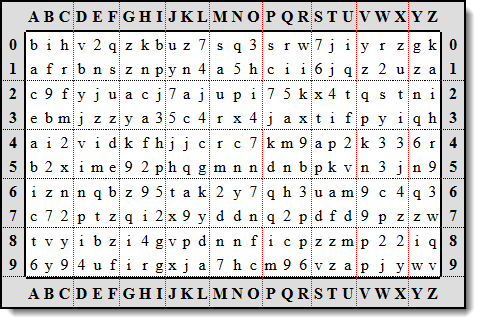 This is a functionality of LastPass that I’ve used upon changing devices but can easily be used if you lose it.

basically its another 2FA option that you can enable alongside of others like authenticators. The grid is generated on the fly and associated with the account (similar to the recovery codes). The grid is randomly generated (as far as I know) and its (I think) unique, and allows the user to be challenged to for a code if other 2FA methods are not available.

This is something that I’ve used in the past with great success cause you only need to stash it in your wallet and your golden. If you lose it you can disable it or generate a new one making the old one invalid.

Yes! This was one of my favorite things on Lastpass before I migrated over to Bitwarden. I had the grid stored in a secure and safe place as a last resort in case technology failed me. It’s just a nice way to know that even if you lose access to your email, phone, or whatever else is needed to use 2FA, that you’re still able to access your account.

Exactly, I just moved today since LastPass decided to nerf the free package I used them for years until they decided to double their price overnight and now its triple what I used to pay, so no more I hope more ppl upvote this, it was one of the best features of LastPass, for the rest right now the transitions has been mostly smooth. The autofill is failing in some sites which LastPass can actually fill hopefully that is addressed later on.

Migrating today from LastPass, it’s sad this isn’t available. I’m OK with it being a premium feature…

I’m also highly interested in this option as it is cheaper and more safe compared to the other options.

Also planning on migrating from lastpass and would really like this feature, or a feature like single use MFA codes, which would probably be easier to implement. Just looking for a non-digital backup option incase I lose access to my phone or email.