Yeah, thanks, I did when the issue first popped up last week. The updated portable version has the same problem. I’m using an older portable version for now but it’s definitely slower and less convenient than the installed desktop version.

I guess I could get an older version to install and tweak it to not update, but that’s not ideal either as updates are important. The developers really just need to get it working again as normal. A lot of people are still on Windows 7.

Finally, they shouldn’t blow up Windows 7 users without at least some sort of warning email or notification. It’s an alarming experience to suddenly be faced with a complex meaningless error AFTER it has already installed just fine. There should at least be a compatibility warning long before that point I think.

Given that, with the latest update, there was no mention of any compatibility changes, plus the fact that it throws an obscure error rather than a programmed alert, it seems like a bug to me.

Yeah, I dunno. Bitwarden doesn’t support Windows 7, nor do they claim to.

If you install software on an unsupported operating system and it doesn’t work, that definitely does not quality as a bug, IMO. Whether or not Bitwarden should support Windows 7 is a distinct issue, I believe, but a lot of extra work and development (i.e. extra $$ costs) would need to go into supporting a deprecated OS to keep it secure and working reliably. So, I suspect only a small handful of users would be supportive. As a user, I personally would rather see those resources used elsewhere to improve future releases of the software, but I totally understand where you are coming from. Cheers!

If you install software on an unsupported operating system and it doesn’t work, that definitely does not quality as a bug, IMO.

David, to be fair to @JaredNel and the others who have posted in this thread, they most likely did not “install software on an unsupported operating system” (unless they just installed Bitwarden in the past week). Bitwarden revoked its support for Windows 7 only recently — as late as August 16, 2022, the Bitwarden download page still indicated that Windows 7 was supported (see Internet Archive):

Fair enough - I should have said: if you “run” software on an unsupported operating system…

And I agree with the point that it would have been nice if Bitwarden notified users in advance that they would be unable to support Windows 7 in the future. No argument from me there.

Thanks for the feedback everyone and deeply sorry for any inconvenience, while we always try to communicate information and changes ahead of time, this issue was unfortunately not brought to light until after release.

Thanks for the link. I was hoping not to have to be spoon fed … but apparently I do. When I go find the roll back version I want, in this case 2022.6.1 I do not see how to get the actual install package.

No problem. Try this link: 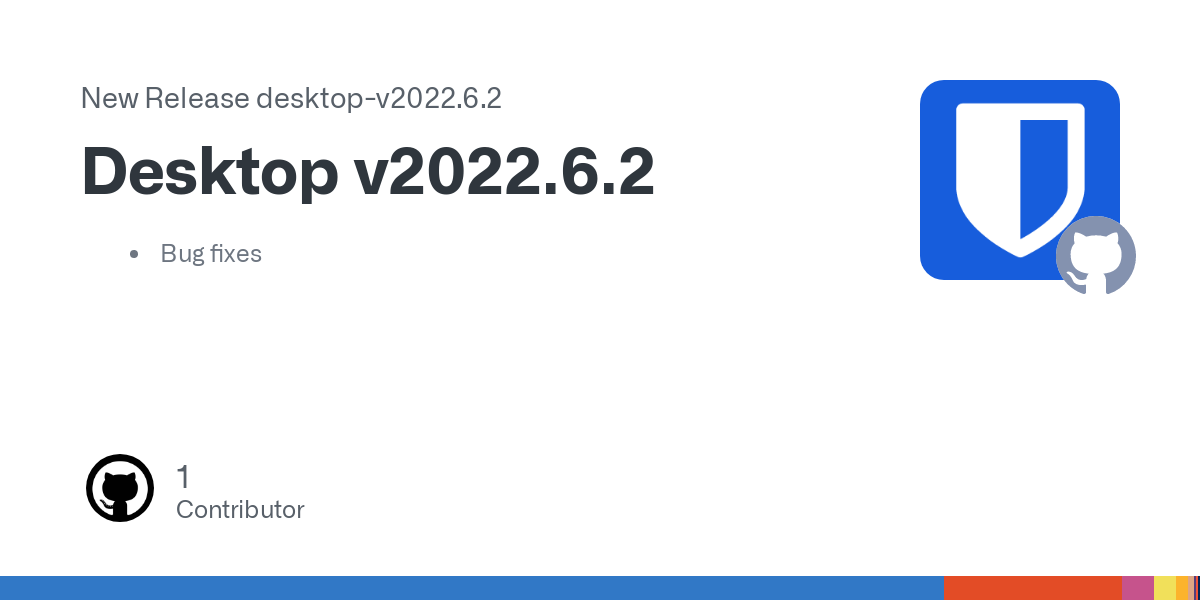 So is support dropped or not? Sorry, I can’t find an answer to this question.

I also have the Win7-Desktop-App “Java-Error” (still with latest 9.1 Version)
So I would like to get the “Windows-Install-Exe” of this linked “Released” Version.
I got some experiences with GitHub (SourceCode), so usually there will be a Jenkins Job (or similar) needed to create the wished “Client-Variant” out of this SourceCode versioned data.

But I do NOT know HOW to start a “creating Windows executeable version” process.

Can anybode help me - thx.

PS: I am totally NEW in this forum and entered JUST because I have this “Win7 Java” problem with the 8.x and newer versions.

I recommend trying this version - it is the ‘portable’ version of the app, which I believe won’t prompt you to update: https://github.com/bitwarden/clients/releases/download/desktop-v2022.6.2/Bitwarden-Portable-2022.6.2.exe

Thanks for all the post contribution, the summary is:

Typically when this happens on a mobile device, this mean the working versions will work for a while until they lose functionalities and stop being useful altogether.

The proposed solutions that have been suggested include:

I also use MS Windows 7 on one of my computers and do not plan to update it yet (there is some hardware for which I simply did not find drivers). This morning I received a message from the program about “strange traffic (Error 6)”. At the same time, the web version on Chrome and all other versions on the smartphone and computers worked fine. I lost half a day dancing with a tambourine until I found this topic. After several attempts (with constant reboots of the system between them), we managed to get version 2022.5.1 working. I understand that developers may no longer be interested and need to support an outdated version of Windows. But I would like to see a separate button on the download page (for those who have Windows 7). Perhaps with the comment “not supported, not guaranteed, use as is”. But in order not to have to look for a solution so suddenly for half a day. So far, there have been no problems with the program. IMHO, one of the best solutions.

In most cases this is not a reason to stick to Windows 7. Just use the same drivers on Windows 10 or 11. To try it out disconnect all drives, attach a “new” (=empty) one and install a Windows version that actually still gets security updates.

It’s not as easy as it might seem. Some drivers that were not originally available for Windows 7 (Adapte SCSI 19160 adapter, for example), and which were taken from Windows XP and adapted, are not accepted by Windows 8 and later systems due to the lack of a digital signature. I know that this check can be disabled. But, besides, I like Windows 7 more than all the later work of Microsoft, everything is set up and working for me, and, finally, I just don’t want to leave this system. However, this is no longer within the scope of this topic.