More and more often (banking in the UK especially) we are seeing a new form of auth input where a form will ask for a specific character in your password. As seen below: 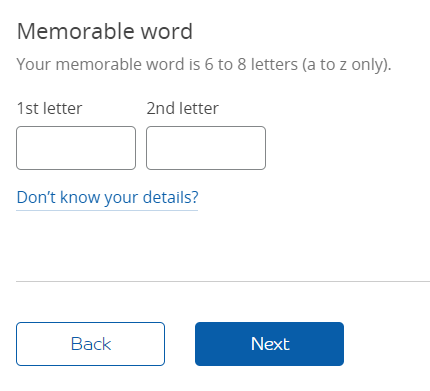 I often find myself opening my extension then counting the letters in my password which isn’t ideal as the longer a plain text password is visible, the greater the security risk.

As an initial MVP, I propose another toggle, alongside the visibility toggle which allows the user to see the index of each letter of their password at a quick glance.

Eventually I think that some thought may have to be given to allow autocompletion on these kinds of inputs (note: that’s not what this feat is for though).

I would suggest that this would be nearly impossible from a practical standpoint to code for. You could simply save the secret word in the Notes fields or as a Custom Field. And they look at the card in the dropdown and see which letters to fill into the form.

Unless this was a universal security feature, I doubt BW would add the ability. It would have to parse the text on the screen to even begin to figure out what letters to fill in.

Your example picture doesn’t mention special character counts. Its only asking for the first two letters. If the question changes, that is even more complex.

Yeah, I agree that the blue sky implementation would be incredibly tricky & an impractical amount of work…

For the moment I’ve created a toggle that simply returns a string with the character index. I have actually been using the Notes field up until now but having sensitive information in plain text fields isn’t ideal.

So is this code contribution somewhat related to feature request: Add a reference number under password characters for websites that require 3rd, 7th, 12th character ?

Can you perhaps add an example screenshot (either actual or mockup) of how the new feature looks like?

It might be a good idea to discuss your contribution in that thread to see how others who might be interested in this feature feel about UI.