Sorry folks, I really wanted to buy Bitwarden - but the lack of this feature is a dealbreaker.
Two reasons: Family members to make it easier for them, and for me personally, I have sites with 10+ logins which use multistep login and selecting the right account with BW is just a PITA. The ctrl-shift-L just isn’t reliable when the username is on one page and the password on the next.

Will revisit next year when LP is up for renewal.

I do wish Bitwarden had this feature, although I do find that using the toolbar instead is not inconvenient. I have also come across times when the LastPass overlay icon clashed with a Show Password toggle.

With regard to the discussion about “old” vs “new” users—with all due respect, I think there are people on both sides of it that are being opinionated.

When people use a particular software, they develop likes and dislikes about it. It is not unfair for people to criticize a product for not having benefits they enjoyed with its competitor. Additionally, I don’t think mocking people because “using the toolbar is too hard” adds to the discussion. It’s not that it’s too hard—it’s just markedly not as convenient for them. Berating people for requesting this is like berating someone for complaining that their previous car had volume controls on the steering wheel, which they used a lot, but the new one doesn’t. “Why don’t you just use the knob on the dash?!” you would say. That doesn’t further the discussion.

On the other hand, I wouldn’t classify not having this feature as a “deal breaker.” If there are problems using Bitwarden with certain websites, I would consider that a website-design flaw. And I do think getting upset that this feature isn’t implemented is making it a more serious issue than it needs to be.

There are some sites where I have 10+ accounts, this can make it challenging as BW does not seem to remember last account I used so if I am using the keyboard shortcut it starts from the top of the list and goes down. Also if I have a long list of detected accounts I end up having ot open the browser addin and then scroll to find the one I wanted to use, its something that I miss a lot from Dashlane as I think they handled this better.

That said I love most everything else about BW so far and hope there is either a way to deal with this that I don’t know about or they will develop a solution. My family, who do not have to deal with multiple logins for sites like I do, have been fine so far.

Update: Someone did remind me in another thread about the right click context menu. That does help for sure but its still not as elegant as the way Dashlane handles multiple accounts.

One of the only features I miss from Lastpass (aside from password generate overlay when making new accounts) Because of that, I will stay on LastPass for my business account until bitwarden has it too.

Please add this feature and make it optional. I do not understand why it was not added long ago. I assume you folks have it coded already.

There is a lot of interest for this feature to be an optional one. But the consensus seems like most would love it. Looks like no one from Bitwarden has reached out.

Anyone know how to reach out to them and get a response from them?

The Bitwarden team is constantly observing the forum. The last time one of their employees replied was on February 17th:

Thanks, everyone! Definitely on our roadmap but no official ETA at this time.

Hated this on LastPass, but if its optional then why not

Like in LastPass, you have an icon in the passoword field to choose a password and validate it

Not just that, but with LastPass when you validate the selection, it directly triggers the saving prompt, because password managers often struggle to detect formular validation, so you miss the opportunity to save a newly created account and potentially loose it (as you don’t know the generated password)

Please and thank you

Can you give a more detailed insight into why you “hated” it? How did it make you experience worse? I don’t work for the project but I am sure they would like to know why, too.

No worries, I felt it just kept getting in the way.
Would show on irrelevant fields fairly often and sometimes obscure placeholder text (same for the chrome extension too)

I see … sometimes it’s in the way, yes. If it’s annoying for a particular site there are options for that I think but I never used them. I really like to have the password generator button in the password fields for sites I am signing up to. It’s kind of reminding me to not use the same all over the place

I think that’s just because of your custom and practice. I’m used to glancing at the Bitwarden icon in the top right of my browser, where I know that I can get to everything password related.

The main reason for me for having such a feature is because I don’t want my password manager to autofill the form fields in case there’s some hacker active on the site that has some (invisible) fields or other hacks that can hijack your login.

I like to make sure that the site I’m logging into is the actual one I want to get into and thus auto-login isn’t as secure as I’d like.

@martin, the autofill would only autofill if the site you visited actually matches the URL you have stored in BW. It can’t be fooled.

As well as what @Toons says, I don’t have autofill turned on. That way I can look a the site myself before pressing L to insert the credentials. With both Bitwarden and myself checking the chances of being fooled are much reduced.

As a browser user I would like to have a Bitwarden icon in the input field(s) where I quickly can select the suggested Bitwarden entries (same suggestion as in taskbar icon).
In same way as Lastpass and other competing products. 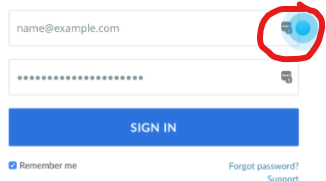