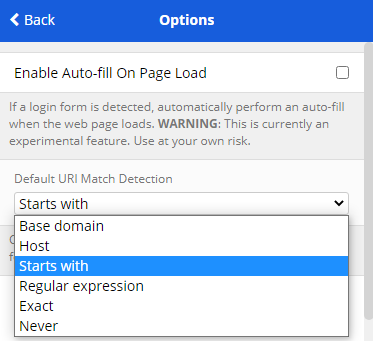 No. I need to apply it to like 80 items. I want to be able to select them all and apply the setting, not do it one at a time. Hence the “Multiple/Selected Items” part. But I don’t want to apply it to all items either, so setting the default isn’t good either.

So consider the scenario:
You have a bunch of items saved as part of an identity that you invalidate all at once. You wish to retain them for the “just in case” situation, but you don’t want them to actively show up as fill options. You can go through them one at a time, it’s just a hassle. To be fair, this isn’t a corner case, but it is probably an infrequent one. But I proposed it as an alternative to a full “archive” feature, because I’m guessing that the addition is relatively minor from a code implementation perspective- you’re just having to apply a change across multiple items, but not changing any other existing functionality or really adding anything new, just adding a mechanism to apply a thing that you can already do, to multiple designated items in a single go.

That would be super useful or at least if there could be a way to export all settings into something like json and modify with search and replace.