So Bitwarden automatically added the $ symbol in some random positions of many passwords in my vault but the weird thing that I observed is that not every password got added with a $ symbol… only the passwords in which I was already using $ have one more $ concatenated to the already present $.

Now I’ve to correct many passwords (40+) which got affected due to this.

Is this for existing entries or new entries added by importing data from a file (e.g., CSV, JSON, etc.)? I assume you mean the latter, in which case it sounds like an encoding issue with the way your original file was created.

I don’t have the original lastpass csv now but the case might be the same.

The confusion arose because at first I thought every password got altered due to bitwarden and after checking the bitwarden csv that thought became a false conclusion coz 40+ passwords were altered which had $ symbol already and the thought didn’t come to me that lastpass might be the culprit.

Did this happen due to lastpass or PlanMaker’s unicoding system (FreeOffice - Ubuntu)?

Good call @dh024, it sounded extremely unlikely that Bitwarden would have caused the issue.

@Vishal_Adhikari there are probably thousands of users that have migrated from LastPass and imported their passwords via CSV, though this is the first time I’ve come across the problem. I’d guess it’s more to do with FreeOffice than LastPass themselves, otherwise we’d have likely had a lot more reports of this. What are you using FreeOffice for? Can you just try importing the CSV directly as produced by LastPass? If it requires edits, I’d strongly suggest using a plain text editor to do it rather than something that might introduce encoding issues. 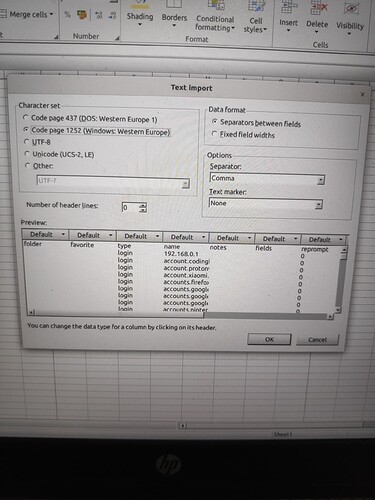 This shows up whenever I open any kind of csv in FreeOffice. After importing the csv from lastpass I opened it in my system (Ubuntu 20.04.2 LTS) just to see whether the passwords were correct or not.

That will almost certainly be what has corrupted the export.